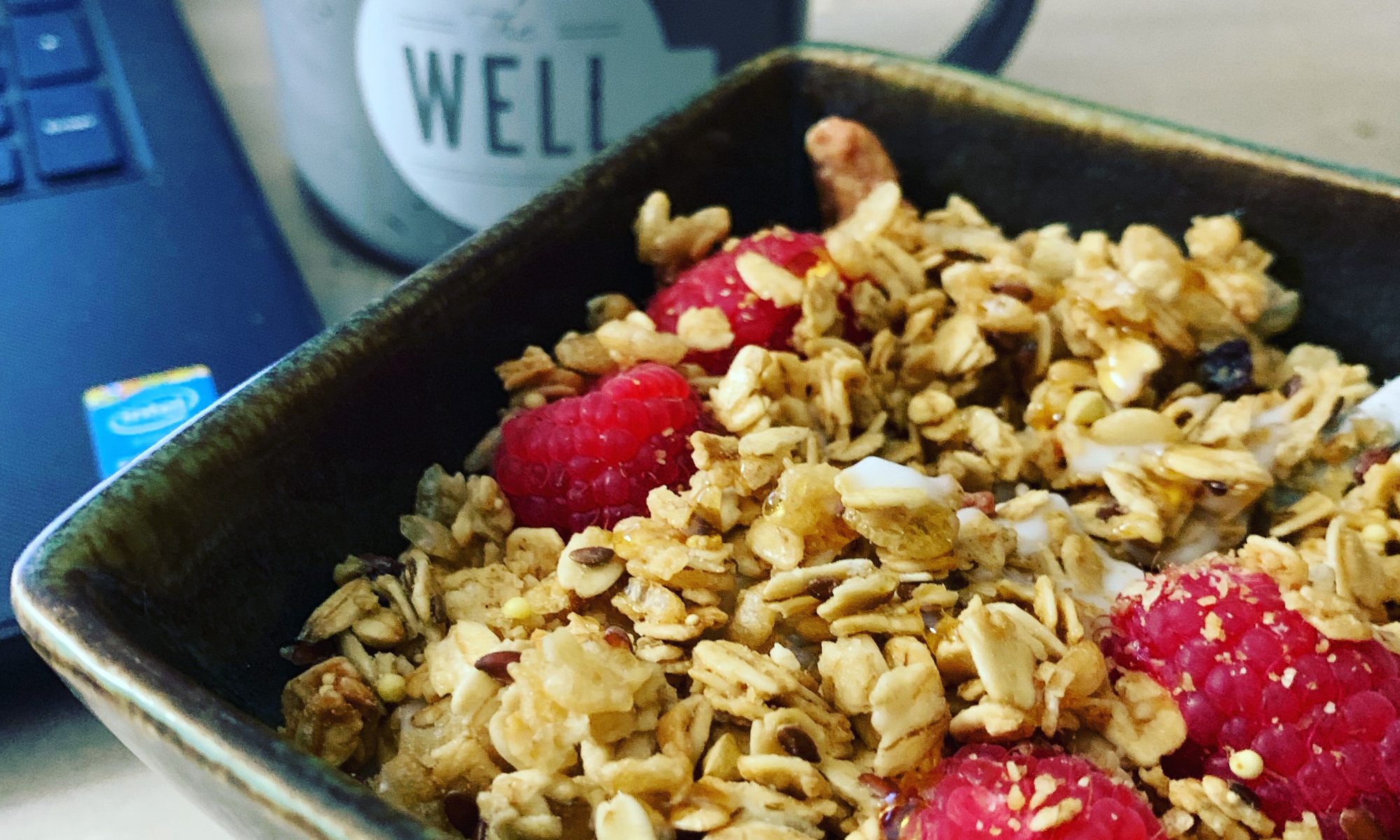 ” Mom, can I have some chocolate chip pancakes?”
“If you want to puke some more. Sure.”

My 11 yr old daughter has the FLU and we were only 24 hours out from a day spent over the toilet.  So far she had tolerated Gatorade , a few popsicles, crackers, and a little white chili the night before. She was making progress and felt a lot better so why wouldn’t I let her?

I have been there , done that, and knew  her body wasn’t ready to handle chocolate chip pancakes.  I offered her a plain one, which she begrudgingly took.
Last night she chose to eat the Salmon and asparagus we were having for dinner and within an hour she was holding her stomach; cramping. A few minutes later, she was holding the toilet bowl.

Sometimes we just have to learn from our own experience…

Why is it that we ignore what we know is in our best interest and choose what we desire in the moment?

Have you ever eaten way too many warm, fresh baked brownies or gone back for a second piece of chocolate sheet cake because, ‘ how can something that tastes sooo good be bad?’ 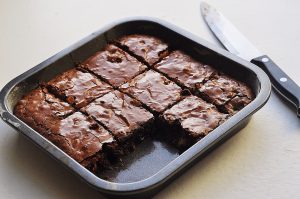 And then when you are curled up in a ball as your stomach pays the price for your indulgence, you swear on your life that you will never eat brownies again.
But the next time that familiar scent drifts through the air ..we forget.

Our bodies are just responding through their senses and our senses are telling us there is something pleasurable.  It means well.  It has good intentions.  The craving, and the choice to eat a brownie is not the problem. It is a perfectly practical solution to our desire for pleasure.  We were designed to experience it.
The problem is that we are responding through the craving loop vs using our critical thinking skills to make the decision. We aren’t accessing the  part of the brain that stores memories from previous experiences; that remind us that the pleasure is fleeting and in the end, we will suffer.

So how do we stop our hand from grabbing the brownie?

It seems to do it without our permission doesn’t it?

Why are cravings such a powerful force?

Charles Duhigg’s book The Power of Habit: Why We Do What We Do has a lot to say on this subject. 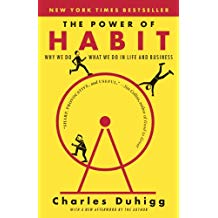 He shares the results of a study on rats who were sent through a maze repetitively to attain a reward at the end of the tunnels. The study showed how initially the brain had to work at full capacity to navigate the maze as it tried to process all the new information and senses that would lead the rat  to the reward. But after a few days of ‘running the same route’ the rat no longer needed to ‘choose’ which direction to run in. The decision making centers went quiet. The rat had internalized it and the path to get to the reward became an automatic routine.

In other words, a HABIT.

He explains how the brain is looking for ways to be more efficient and  creating habit loops is one of the ways it does this.

You no longer have to think.

You know when you start getting into a routine of making the same things for dinner week after week, and how much easier it is to repeat them vs trying to plan something new?
Or  how you often work more efficiently the fuller your schedule is because you set up a consistent routine to get everything done?  When your days are more sporadic and you have more free time, you often waste time trying to figure out what to focus on.

I discovered this with my writing recently.  If I just set the timer and give myself 30 min I get a lot more done than if I don’t put a time frame on it.

I believe  the reason so many women  are  stressed and overwhelmed today is that they are trying to make too many decisions and  don’t have healthy habits in place.

Our brain’s get exhausted.

The more we can cut down on decisions and simplify through habits , the more efficient we function.

And the fewer mental breakdowns we have…

I tried an experiment with FOOD recently.

I decided as a part of my church’s 21 days of prayer that I would simplify my food choices to 21 things. Why?

It’s similar to Jen Hatmaker’s SEVEN challenge,  but I figured the best motivator to follow through on something is choosing what you want vs following someone else’s advice/rules.

It was amazingly effective.

It has been 37 days now and I am slowly adding back a few things, but I realized this way of eating has almost become a habit now.  My strategy for adding back things like caffeine and sugar, which are powerful addictions, is to have them sporadically instead of routinely, thus preventing habit formation to occur.

Yesterday I chose to have one cup of caffeinated coffee in the morning.

Today I am having decaf.

Tomorrow I may start with green tea.

We will see how it works! Wish me luck!

Here’s the thing.
It’s not the caffeine that is bad. It’s when it takes authority over my ability to decide if I want to consume it or not that it becomes a problem.

I have always been an individualist. I never drank in high school and still don’t to this day because I desire to be in control of my actions more than I desire to do something just because everyone else at the table is. Plus I never acquired a taste for it..

Coffee is another thing… 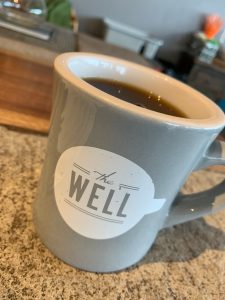 I was served my first taste in a cute little tea cup with a generous portion of flavored cream. I can still visualize that experience. I am all about experiences.
The cue was the pretty tea cup and the scent of coffee.  I went home and every time I smelled coffee brewing or saw my husband with a mug in his hand it triggered that cue. A few weeks later, a routine emerged. The reward was the warm liquid that brought me back to that initial experience.

To this day, it motivates me to get out of bed.  I automatically go to the Keurig , put in a K -cup and pick out one of my favorite mugs. Sometimes I even choose the one that matches what I am wearing! 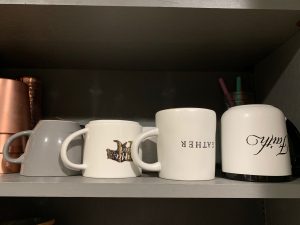 When I decided to try to experiment and see if I could go off caffeine, I had to figure out what my cue and reward were. Once I realized that it was really just the warm liquid I was after, I was able to gradually replace it with tea or decaf.  I had to wean away slowly and it took about 2 weeks but I discovered I did not need the caffeine and actually had more energy.
I still get up and think, “man, I would really like the caffeine, ” but I keep overriding that feeling and choosing to mix it up.
If you are someone who likes to be in control , that’s a great motivator !  Here are a couple of questions to think about..

Where do you keep running the same route knowing  that the thing at the end of the tunnel is not serving you?

What direction do you want to run in?

Are you paying attention to what your body really needs or are you driven by your habits?

Try one of these therapeutic activities  this week!

Once you can figure that out you can look for something to replace it with that serves you better  or at least something that you can alternate it with to break up the habit loop and be in control of your choices.

Head over the the shewalksinwellness fb group and let us know what your experiment will be this week!