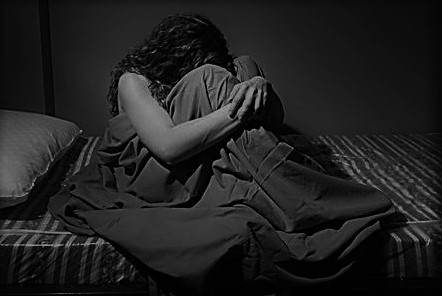 I have a confession to make…

I chose to give away my power  to a little  word sent through a text the other night.

It wasn’t even meant for me.

It was ‘spoken’ by an irritable 19 year old boy who was voicing his opinion. What was the word?

I think there was more to it that that little word, however.

Several months ago I took a personality test.  The results of it were  empowering for me. I was dancing around the house like a teenage girl that had been asked out on a date by a boy she had been longing over.  Remember that  feeling of hoping HE would notice you ?
I had finally been “seen!” 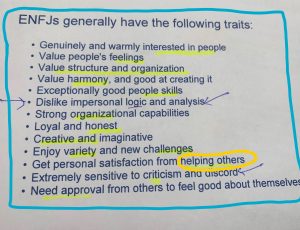 As I poured over the results, I felt like I was SEEING in black and white the secret longing of my soul. 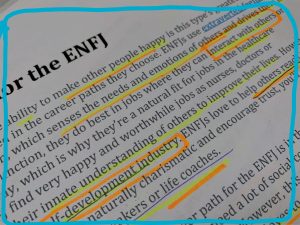 I highlighted all the words that jumped out at me; the little words that described ME; words I had been afraid to speak out loud.

It wasn’t that this test knew me, but it was the concrete language  I needed to start believing the words that had already been spoken over me.  It was a tool that helped me get it out.

Every time I wanted to voice my souls longings  , I held back , worried others would think I was ignorant  for believing I could do or be anything other that who I currently was.

I didn’t want to be one of those contestants on American Idol that are completely unaware of how much they suck.

I thought just because I am passionate about something doesn’t mean I should put it out there into the world. It’s one thing if I’m just doing it for personal enjoyment, but if the purpose is to bring life to others , then causing them so much discomfort that they have to look away was not something I wanted to risk. ( kind of like when I watch Michael Scott on The Office,)

I was embarrassed to be SEEN.

Even if I believed in myself and felt called to do what was on that page, I was afraid no one else would believe in me. That they would just prefer I be who they needed me to be; you know that version that serves them.

Or the one that makes them comfortable.

I think sometimes those closest to us don’t cheer us on because if we grow and move and start taking risks and being vulnerable, it might challenge them to do the same.

Or maybe it was Me that was afraid of the risk. I had been hurt by rejection too many times.  I love all things balance, comfort , warmth, easy going… Anything that risked that put my values in jeopardy.

One of the things I learned on the test is that I am wired to HELP people.  I am passionate about connection and helping others walk in their full potential.

Last night I sent a text to my son to try and HELP him. I could see that he was in a foul mood about something. As a mother and someone passionate about the wellness of others it is so hard for me to sit back and do nothing.

So I did the cowardly thing and sent a text.

I thought my motivation was pure at the time. I was trying to give him space; but all the while I was trying to solve his problem from the other side of the wall. It was a bad idea. 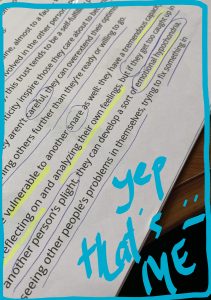 I was trying to remember what the results of the personality test he took in High school were so I could look up career matches for him.  He was about to sign a contract with the army and go to Ranger training.  I didn’t want to dissuade him; I was hoping that looking back on it would help settle my heart and confirm the decision.
His response:

“Those tests are stupid. Anyone who listens to them is ignorant.”

Yes, I knew he was 19. Irritable. Frustrated with his own lack of clarity.  Frustrated with others for trying to steer him in a direction he didn’t want to walk in.  He was not in a place to receive any input from his mother.
Yet..

I allowed that word to play on rewind over and over in my mind until I was irritable. Angry. Hurt.

I got up from the couch, stormed down the hall, slammed my bedroom door, and curled up in a ball in my bed. I laid there allowing myself to FEEL and indulge in every painful emotion that little word triggered..

Was I really ignorant?

Have I been stupid to believe what that test said about me?

Have I been stupid to pursue what my heart was longing to do?

What makes me think people want my help? They obviously don’t.

No one asks for my help. No one encourages me to pursue this.. Isn’t that a sign that I am not good at it, or capable? If I was, they would be cheering me on and saying I needed to do it. That I was made to do it. But they weren’t.

I was the only one who believed in myself.

How foolish of me.

I almost got up and deleted my entire website. I felt embarrassed, exposed, humiliated. I began transferring his “not needing me” to ” no one needs my help.”

I started cursing Brene Brown for challenging me to DARE GREATLY and be vulnerable.

Look what that gets me?  I just stand alone, calling out , sharing my struggles, and there is just silence on the other end.  What kind of purpose is it to try and come along side insecure women?

They don’t know how to show up and support or provide encouragement to others because they are too busy listening to the voices that tell them they are not enough; that they are ignorant.

They can’t give away compliments or build others up because they are not standing in a position to do so.

What a crappy calling.

Everything I am learning about marketing and finding your target audience says I need validation; to know that I am meeting a true felt need.

Well, I know from the depths of my soul there have got to be women out there that need what I have always needed, but they won’t admit it; for the same reason I wanted to delete my website.

We feel exposed and naked when we bare our soul.

Especially when people just stand around and stare. No one brings you a robe or comes along side you. You are often standing alone. And they keep their distance .

Your nakedness makes them uncomfortable.

of a young girl sitting in the dark corner of brothel stall.

A place she did not dig, but was forced into against her will. She had real live tormentors coming into that stall one after another to take advantage of her vulnerability.

And here I lie allowing a little word and the thoughts they triggered to hold me captive and steal my dreams.

That vision gave me the will and motivation to fight. To throw the covers off and get back up on my feet. To march back out into that living room and redeem the rest of my evening.

How can I not Rise up and Dare to be  vulnerabe?

If I have to stand naked in a room to start making a difference and doing what I have been called to do then so be it.

It’s time to stop shaming ourselves.

It’s time to quit giving power to the little words that try to torment us.

What was it about that word that triggered me?

I looked up the definition today because that’s just what I do. I like to get to the bottom of things. I do not want a repeat of the other night.

I want to be able to tell that little voice to go to H___!

( not my son, just the voice that took his word and manipulated it to take me out)

The definition of ignorance is the state or fact of being ignorant : lacking knowledge, education, or awareness; to be unaware….

As a 25 yr old bride , I sat in a dark room , knees pulled to my chest begging God to never let me become unaware of my short comings.

I did not want to be blind to my tendencies.

I can deal with knowing I tend to over react, indulge in pity parties, make assumptions…. but to do those things and be unaware I’m doing them.. that was something I couldn’t accept.

My husband and I had an argument and after several hours of being angry and hurt and trying to sort through my emotions as I vented to God, I finally SAW the problem, and she was sitting there holding her knees.

I was torn up because I realized I was behaving in a way that I despised.

I began to feel defeated and fear began to take hold.

It was that night that I discovered my passion and my greatest fear.

To be self aware and to to be unaware..

I knew as long as I was aware of my weaknesses; my tendencies , I could learn to overcome and find victory.

The minute I became unaware, would be the moment of defeat.

I guess that explains why I am on a mission to help teach women how to MOVE forward; to be self aware and do the work it takes to discover, grow, and thrive.

And why ignorance is the enemy of that mission.

Ignorance is the obstacle that stands in the way of MOVING FORWARD.

So here I am today; still growing, still learning, still uncovering my triggers. Still getting pulled into pits of pity and despair, but fighting like mad to get back up and keep moving because

It’s in the moving that we are healed.

Walking in wellness does not mean we have arrived and we won’t get knocked down. It means we KEEP Walking. We don’t arrive, but we stay on the path. We may sit down and wrap our arms around our knees for a time, but then we GET BACK up and keep going. We do the work to discover what side lined us ,and become more aware so the next time it tries to take us out, we will be armed with knowledge.

Whatever phrase works for you, use it, say it, declare it.

Call out those lies and speak the truth over yourself.

Ignorance is making decisions when we are under the influence of fear.

I’m so thankful for that perspective shift and the vision God gave me as I laid in my bed.

To SEE beyond myself and remember there is a world out there that needs us.

There is a young girl out there that needs to be rescued. 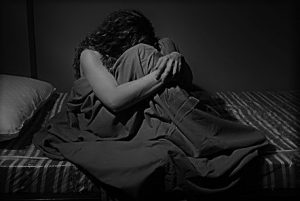 Let’s fight for our wellness and KEEP stepping into what he has called us to know matter what anyone else says.

If that doesn’t motivate you, how about this…

Every time we indulge and cry our eyes out we create wrinkles.

Let’s quit helping out the aging process and start creating life and vitality and freedom and hope and all things that spring up!